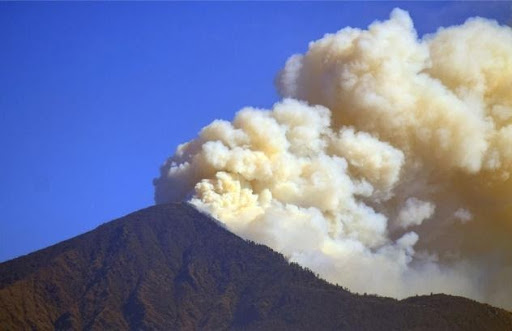 The raging wildfire in the forest on the 3,800m high Pathivara mountain in Taplejung has spread into the nearby Kanchenjunga Conservation Area (KCA). The fire started five days ago, and all efforts to douse it have been unsuccessful because of strong westerly winds.
A Simrik Air helicopter equipped with a special ‘Bambi Bucket’ water bombed the flames on Monday, and although that protected the temple at the summit of the mountain, it failed to stop the fire. The smoke plume from the fire raging near the shrine was visible in a NASA World satellite image on 26 December.

After the fire entered the KCA, the Lukumpa Community Forest committee got volunteers to try to control the spread. However, the rotor wash from the helicopter appears to have fanned the fires even more, and the water was dropped from a height that made it largely ineffective, said Ganesh Tiwari of KCA.

The Simrik Air helicopter made five sorties from the half-frozen Jor Pokhari lake to Pathivara, and did manage to save the shrine. However, several dairy farms and cow sheds are now threatened on the eastern slopes of the mountain.
A large tract of forest has already been reduced to ashes, in an area that is an important habitat for the endangered red panda and other species.
Simrik Air pilot Capt Surendra Poudel told RSS news agency that this is the first time aerial firefighting has been used to put out a wildfire in Nepal. He added: “We had the equipment and the trained personnel, and we could put it to use here.”

We use cookies on our website to give you the most relevant experience by remembering your preferences and repeat visits. By clicking “Accept”, you consent to the use of ALL the cookies.
Cookie settingsACCEPT
Manage consent

This website uses cookies to improve your experience while you navigate through the website. Out of these, the cookies that are categorized as necessary are stored on your browser as they are essential for the working of basic functionalities of the website. We also use third-party cookies that help us analyze and understand how you use this website. These cookies will be stored in your browser only with your consent. You also have the option to opt-out of these cookies. But opting out of some of these cookies may affect your browsing experience.
Necessary Always Enabled
Necessary cookies are absolutely essential for the website to function properly. These cookies ensure basic functionalities and security features of the website, anonymously.
Functional
Functional cookies help to perform certain functionalities like sharing the content of the website on social media platforms, collect feedbacks, and other third-party features.
Performance
Performance cookies are used to understand and analyze the key performance indexes of the website which helps in delivering a better user experience for the visitors.
Analytics
Analytical cookies are used to understand how visitors interact with the website. These cookies help provide information on metrics the number of visitors, bounce rate, traffic source, etc.
Advertisement
Advertisement cookies are used to provide visitors with relevant ads and marketing campaigns. These cookies track visitors across websites and collect information to provide customized ads.
Others
Other uncategorized cookies are those that are being analyzed and have not been classified into a category as yet.
SAVE & ACCEPT